State apportionment, or state general purpose funding, provides the largest portion, 65.5 percent, of Lake Washington School District’s general fund revenue. The amount is determined by the number of students attending our schools and a series of formula factors. Those factors include legislatively-set base salaries, employee benefits and non-labor allocations.

The local property tax levy provides 13.2 percent of general budgeted revenues. These levy amounts are capped by the legislature: the district cannot raise more money than the limit even when your property value rises or even if the community wanted to raise more money for schools. Levies must be approved by Lake Washington School District voters at a special election.

The district generates 4.1 percent of its own revenue by charging fees for programs such as extended day care, athletic participation and preschool. This category includes revenue from sales of school lunches and investment interest earnings.

Money from the federal government comprises 3.7 percent of district revenues. These dollars fund such programs as Head Start and Title I (educational enhancements to improve achievement of low-income children). They also provide supplemental funding for special education programs and support free and reduced price lunches in the nutrition services program. These revenues also may only be used for their specific program purpose.

Payments from other districts for participation in joint programs, grants from other non-state agencies and transfers from Capital Levy for Technology Training & Applications accounts for 1.8 percent of budgeted revenues.

Click on the tabs above to see "Where does the money go?" and "School Funding Basics."

Classroom expenses are Lake Washington School District’s budget priority. That’s where children spend most of their school day and where learning happens. So most of the district's resources go there directly.

This portion of the district’s budget is spent in and on the classroom, including expenditures for teachers, counselors, librarians, educational assistants, teaching supplies, materials, textbooks, instructional staff development, assessment and curriculum development. Also included are expenditures for pupil management and safety, health-related services, activities/athletics support and supervision, and community services and programs.

This segment covers building administration, including principals, and school support, such as secretaries and office supplies.

These expenses include costs to maintain the district’s facilities. This segment covers grounds and building maintenance, cleaning services, utilities costs and building and property security.

These expenses include development, coordination and evaluation of instructional programs by the superintendent and central office. Also included are business and human resources, supervision for nutrition services, maintenance and transportation, communications and legal costs.

This segment includes the operations, maintenance and insurance for transporting students.

This segment includes the costs for food and operations for the district lunch and breakfast program.

These expenses include property and liability insurance, information systems, printing, warehouse and distribution
services. Also included are expenses related to the Extended Day program, which provides fee-based before and after school care for students.

Ever wondered how school funding is decided at the state level? Or why there seems to be money for technology and new buildings but not for supplies or needed staff positions? The answer lies in the state's school funding system.

The Basic Education Act, passed in 1977, defines formulas used to fund basic education for students in Washington state and thus what the state will pay for. Local levies are supposed to pay for extras – enhancements that local taxpayers want above and beyond the basics.

Funding for operations is capped

Basic education funding from the state, otherwise known as state general funding (see "Where does the money Come from?" above), made up 64.7 percent of the 2019-20 budget for the district.

Different elements of the system were put into place so that access to education remained relatively equal across the state: a student in a poor area would not receive an education substantially worse than a student in a rich area. As a result, districts are limited in how much money they can raise through local levies.

Local levy dollars come from property taxes and provide additional money for school operating funds. These funds fill in the gap between state basic education funding and the current educational program and account for 13.1 percent of the district budget. While the state has taken steps to provide additional funding for basic education, many areas remain underfunded. These areas include: Special Education, Highly Capable, English Language Learners, transportation, substitutes, and safety and security. Further, the district will always need local levies to fund local programs and priorities which are not considered to be Basic Education and will never be funded by the state. These programs and priorities include: professional learning, athletics, extracurricular activities, early learning, and additional courses (7-period day).

State dollars are provided through what are called state categorical funds, those earmarked for specific purposes, such as special education, transportation, and English Language Learner education. These dollars are not available for other purposes.

Federal dollars are relatively few: 3.9 percent of the district’s operating budget comes from the federal government. That money is also earmarked for specific purposes, such as Head Start, educational support for low-income students, and support for free and reduced-price lunches.

If state general funds, state earmarked funds, and local levy dollars do not cover the costs of running a school district, there are few legal options for the district to raise more money. It can charge fees for some programs, like extended day, athletics, or school lunches. But the ability to charge money is also limited: students are guaranteed a free education.

Money for building schools and buying big items (buses, technology) is raised through separate ballot measures, such as capital levies and bonds. These dollars can only be spent on that specific purpose. They can’t be transferred to the general operating fund to pay for something else. So we can’t, for example, decide to use the money from the technology levy earmarked for Smartboards or new computers to pay for more teachers: that would be illegal. We also can’t decide to use the money set aside for building schools to pay for anything in the general operating budget, like staffing, supplies or textbooks.

Under the McCleary Plan the legislature increased state funding for staff salaries to reduce the reliance on local levies, including the following factors:

Lake Washington School District and the Lake Washington Education Association (LWEA) had already settled on a 4-year negotiated agreement that was in effect beginning with the 2017-18 school year. The agreement had a reopener limited to re-negotiating salaries for the 2018-19 school year. The district negotiated with LWEA during the spring and reached agreement this past June (2018). When negotiating with our teacher union (LWEA), we typically reach agreement on our contracts in May or June so that changes are factored into the budget development process in preparation for the next school year.

The main goals for the current agreement include the following:

The district reduced the percentage of an average teacher’s salary in LWSD that is paid from levy funds from 29% to 11%.

Teacher salaries increased an average of 15%. This includes a 3.1% adjustment and the implementation of the new salary schedule per legislative requirements.

The district makes decisions related to collective bargaining based on a multi-year financial plan in order to ensure agreements are sustainable.

All staff received a 3.1% salary adjustment for 2018-19. Some classified groups had additional amounts provided based on their collective bargaining agreement. None of the district’s classified agreements were open to negotiation for 2018-19 school year. We will be negotiating some classified contracts this spring for renewal, effective 2019-20 school year.

As part of the McCleary Plan the legislature required districts to publish a four-year budget plan as part of the annual budget development process.  Even though this is a new state requirement, the Lake Washington School District has always looked beyond a one-year view to develop long-term enrollment and financial projections.  This ensures that decisions made today are done so with a long-range plan.

The district’s current four-year plan was prepared to account for enrollment growth, costs of opening new schools, and legislative mandates. The plan is also based on current data and reasonable financial projections.  While the districts fund balance is increasing in 2018-19, these funds will be needed to cover future expenditure increases and additional revenue losses from the levy.  In addition, there are unknown long-term impacts related to health benefits, increased pension obligations and other unforeseen events that could have a negative impact on the long-term outlook.

The four-year budget plan is located in the district’s budget documents, both the Budget Summary and the State format F195 which can be found on our website under Budget and Financial Reports.

The McCleary Plan limited what local school districts can collect through their EP&O levy. Districts can collect either $1.50 per thousand of assessed valuation (AV) or $2500 per student, whichever is less. For Lake Washington, the $2500 per student amount is less. Districts must renew their levies every 4 years. In the February 2018 EP&O renewal, LWSD did not seek the full amount authorized by the legislature due to the additional state funding for basic education. LWSD reduced the local tax rate for the EP&O levy by $0.23 per thousand. 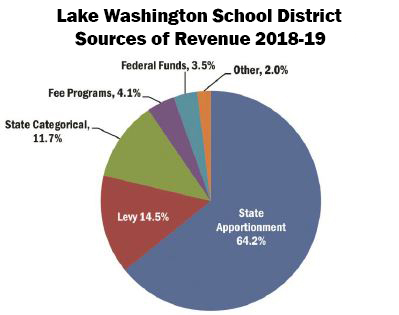 While the state’s McCleary plan does provide additional funding there are many areas that remain underfunded by the state, including:

In addition, the district will always need local levies to fund local district programs and priorities which are not considered to be basic education and will never be funded by the state including:

State funding provides a little more than 75 percent of the funding for operations.

The district currently depends on the Educational Programs and Operations (EP&O) levy for 14.5 percent of its operating costs. These funds fill the gap between state funding and the cost of today’s education programs and support.

EP&O levies ensure our students have continued access to staff, programs and course offerings to be successful and graduate future ready.

The EP&O levy fills the gap between state basic education funding and the current educational program. Among the items it helps pay for are:

The state legislatures limits what school districts can collect though the EP&O levy. Lake Washington is limited to $2,500 per student. The 2018 levy is approximately $2,149 per pupil.

The EP&O levy must be renewed by voters every 4 years. The next renewal will be in 2022. Levies require 50% approval to pass.